Results of the 2010 Tree Survey

There are about 80 species of trees found in the Annex. These include both native and non-native varieties. As of the 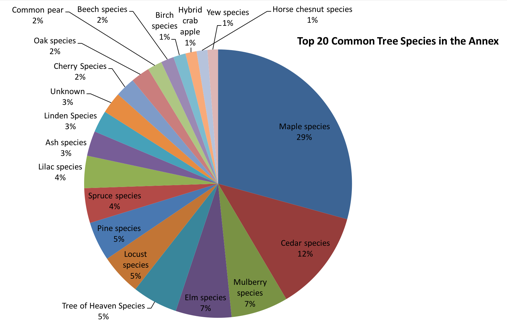 Maples make up the largest tree species group found in the Annex, about 30% of all of our trees. These include Amur, black, Freeman, Japanese, Manitoba, Norway, red, silver, sugar, and sycamore maples. However, the most numerous type of maple growing in the Annex is the Norway maple. Not only are they non-native and invasive, but they also crowd out native and local species, such as the sugar maple. There are 1084 Norway maples in in the Annex; they make up 42% of all the maples in our neighbourhood.

Cool Facts About Our Trees